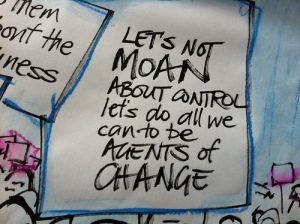 I recently Chaired the HR and Harnessing the Power of Social Media session at the CIPD Annual Conference in Manchester where Neil Morrison, Group HR Director for Random House and Matthew Hanwell, HR Director, Community & Social Media for Nokia were sharing their thoughts around the opportunity presented by social media.  The session was well received but has caused a bit of debate, some of it ill informed such as this one from XPertHR’s John Read called “Social Media Policies are not Stupid. Here’s why.“  It seems that john is not alone in this view but I particularly took issue with his stance and was compelled to write this blog in response.

Most of the fear around social media in organisations comes from those who do not understand – and that means actively use – social media.  I totally disagree with John’s analysis which comes from an uninformed point of view.  And a legal view is not necessarily an informed one.

Social media has not suddenly unlocked a new human “Stupid” genome.  All the threats he mentions including confidential information leakage and defamatory statements are all possible in existing media.  We already have policies coming out of our ears to deal with behaviour in the workplace.  If the law is such an ass that it needs a separate policy to remind people they cant say “F*** You” on social media when its already covered in general behaviour then the law needs to have a word with itself.  Which it probably does.

I thought this statement, taken from a comment by a John Eccleston on the blog was particularly wide of the mark:

“Also, letters and phone calls do not have the same potential as social media to cause long-lasting, broadcast brand damage. Once written, a tweet or a wall post can be around the world in seconds – leaving a digital footprint that can be impossible to erase. An ill-considered social media activity can cause far more harm than a bit of old media – this deserves to be reflected in how employers handle it.”

Sorry John (Eccleston) but this is simply not true.  Tweets may have greater reach, but there is only so much damage you can do in 140 characters.  And they disappear very quickly.  Compare that to letters, faxes, emails and phone calls – often rolled out in legal cases.  Try and find a recorded phone conversation, or an email or a letter you wrote 12 months ago.  Not that difficult actually.  Now do the same with a tweet.

Too many HR professionals are tackling this subject when they themselves are not involved in social media, and instead are being advised by lawyers or taking guidance from commentators who are similarly ignorant.  Fanning the flames of fear around the subject is too easy and serves only to drive fees for lawyers, column inches/unique visits for journalists and the day job for HR.

I have searched the social media landscape for John and have come up with little evidence that he is active in social media.  He appears to have 2 linkedin profiles both of which are inactive and I can’t find him on twitter at all, unless he has an anonymous profile.  One thing I do know about this social stuff is that unless you are actively immersed in it, you cannot fully understand it fully.  And unless I’m mistaken, John is not immersed.  Which means he is not engaging with the audience around which this debate centres, on the very tools which he is commenting about.

My final point would be that if you look back, the number of CEO’s and Exec team members who have brought a company into disrepute FAR outweighs the number of rank and file employees who have done so.  As I said at the conference in my closing comments, ultimately, this is less about social media and more about authenticity.   It’s really about an organisations ability to become more comfortable with transparency, openness and trust.

Fair play to John Read he has come back to me and asked that I reconsider my verdict on him being ill informed.  On reflection, he is right to say that he is very informed on the legal issues – much more so than me obviously!