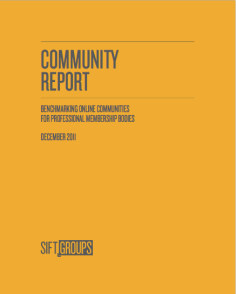 One of my highlights just before the Christmas break was to attend the SiftGroups Membership Community Huddle, along with representatives from my client the CIPD.  It was a short half day get together for participants in their recent survey amongst membership communities which resulted in an excellent report benchmarking online communities for professional membership bodies.  Despite it’s focus on membership bodes, the report has some excellent content and insights that are relevant to those in other commercial sectors and I would definitely recommend downloading and reading a copy if you are in anyway interested or involved in online communities.  The session was also very good with short bursts of insight from the report followed by frequent break-out groups to discuss the implications and share experiences.  Hats off to Sift and a big thank you from me for the invite and for letting me reproduce some of the highlights from the report and seminar here.

My thoughts and observations are below and some of the key findings from the report are also outlined further down the page.

Justification – Probably the first thing that struck me from the feedback from the community managers themselves is the work they were having to do internally, especially with senior management, to prove the value of having and investing in a ‘community’.  As someone who is working with a membership organisations on putting community at the hear of member engagement, I fully appreciate why but feel that this just shouldn’t be the case.  In a previous post I commented that if membership bodies were being created today, they would be communities with a purpose.  In other words, ‘community’ and the principles thereof would be central to what they do, no question.

Plateauing activity – Many are seeing a plateauing of membership or activity.  There was a feeling that this might be due to the age of the community and that over a longer period – say 2 to 3 years – it becomes more difficult to sustain. However I’m not so sure about this.  Unless you are in a shrinking overall market – your ‘community’ isn’t plateauing or shrinking.  When you consider that many of these communities were started before the thrust of social media it’s perhaps more likely that the activity or ‘conversation is taking place elsewhere.

Social Integration – One of the most telling charts from the report is this one in my opinion.  The problems many membership bodies face in terms of proving ROI and the benefits of community are not surprising when you look at this chart. The overall lack of integration with the social channels mentioned below is a big missed opportunity and indeed, I would argue that communities absolutely have to have tight social integration in order to see the community activity bear wider fruit.  Many of these organisations provide events and other membership benefits which would not only benefit from the marketing ‘amplification’ that tighter  integration with social channels provide, but could also be shaped and scoped better with input from community members.

Conversation vs broadcast – It appears that the emphasis of community and social interaction was still mainly around broadcasting/messaging rather than relationship building.  The chart below shows the level of activity in the community by each function – note the positioning of customer and member services.

KPI’s – My observation was also that the KPI’s in use for the communities are very transactional in nature and have a heritage in web 1.0 – visits, page impressions, time on site etc. I was surprised also to see that of the KPI’s the respondents would like to use, none mentioned sentiment or influence based measurements.  It would seem that as yet, many vendors are not offering these kind of measures or insights within their analytics which needs to change.

Functionality – This was perhaps one of the most striking charts in the report although one could argue that if your community is not at the heart of your strategy and you are failing to support/justify or engage with it, you will fail to see the benefit of any of the core functionality.  One point to note: whilst blogs are in there, most of the organisations I spoke to at the event have what I call a ‘managed’ blog, in that blogging is done by a ‘select few’ of chosen contributors.  I don’t recall any that provided an open platform for members to create their own blog for open readership.  This is another missed opportunity for engagement.  Not only can the most interesting and inspirational blog posts come from the most unlikely of sources (Indeed, some ‘experts’ produce awful posts!) but the comment stream that results creates valuable and sharable content itself – sometimes way better than the original post. 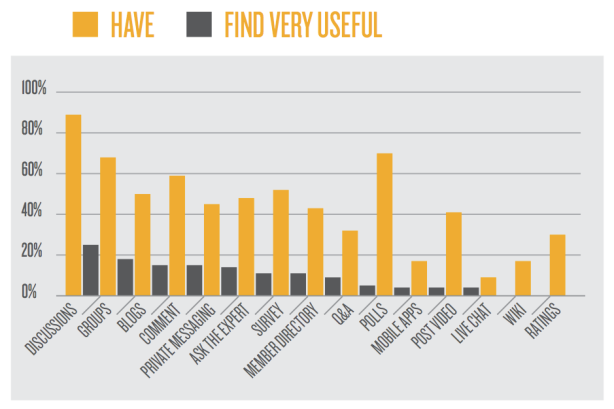 There are many more excellent observations and insights from the report, but the key ones that stood out for me are: